The Fork component determines where to redirect the user or which message to display, depending on the data received from the user.

Files from users (images, documents, etc.) recorded by user Input fall into the variables of a specific user (User States section), are stored for 7 days, then disappear beyond recovery. If you need access to the files received in the bot for a period of more than 7 days, then all files must be saved on your device.

The pdf and docx files uploaded via Viber are downloaded without an extension. To open the file, you need to add the extension (.pdf, .docx) manually after downloading.

Interaction of Fork and Buttons with hints

The Buttons with hints show the user several buttons. When the user clicks on the button, its contents (text, emoticons, phone number) are sent to the chat. The fork can catch this input.

In the example, Fork will direct the user to the screen depending on the button they selected. If the user writes something himself, the default goal will return him to the same (previous) screen. 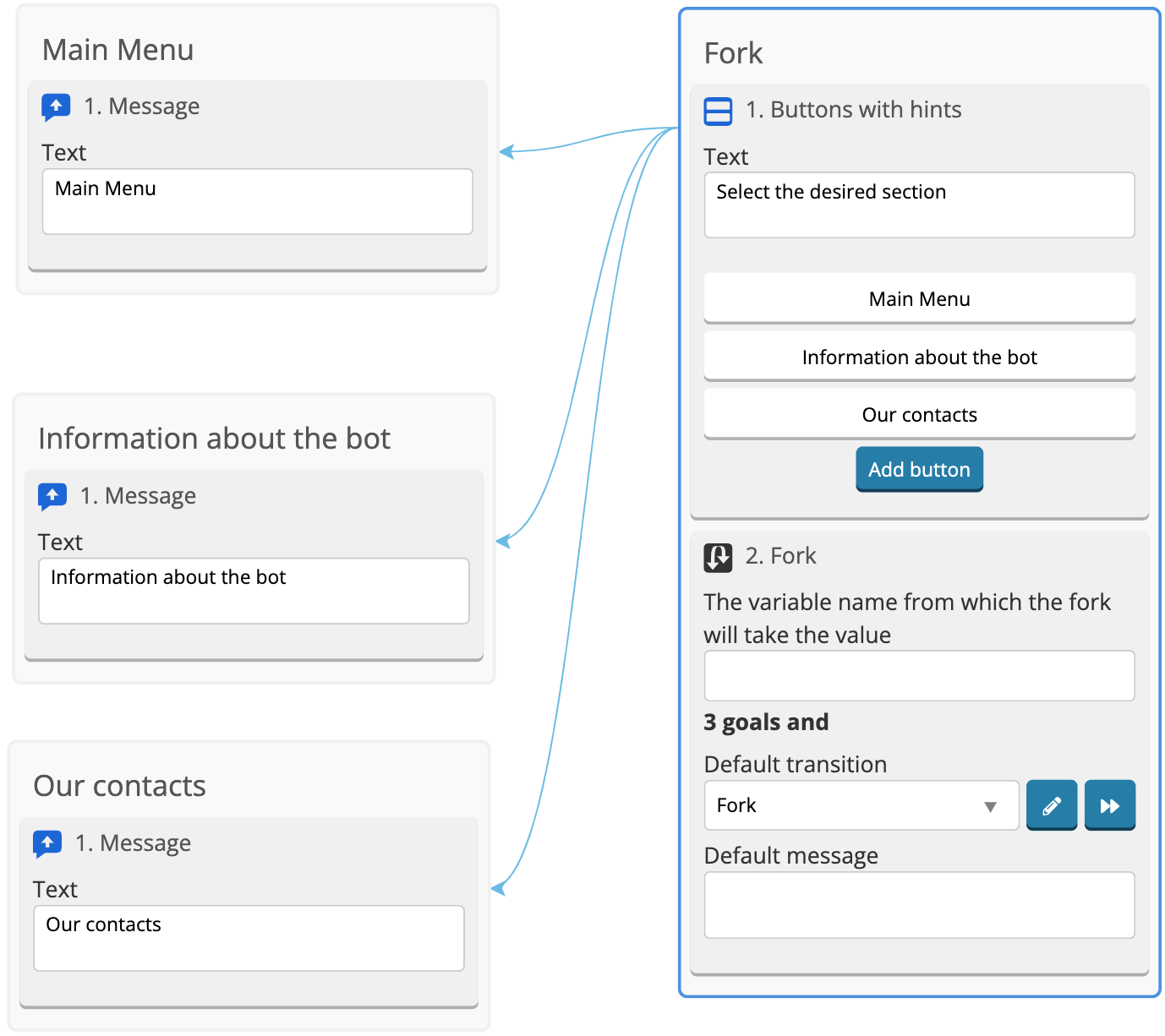 Sometimes you need to check the value of a specific variable. For example, when opening access to certain bot blocks.

To do this, you need to specify a variable in Name of variable wich will be used for saving input data field and add goals for possible values. 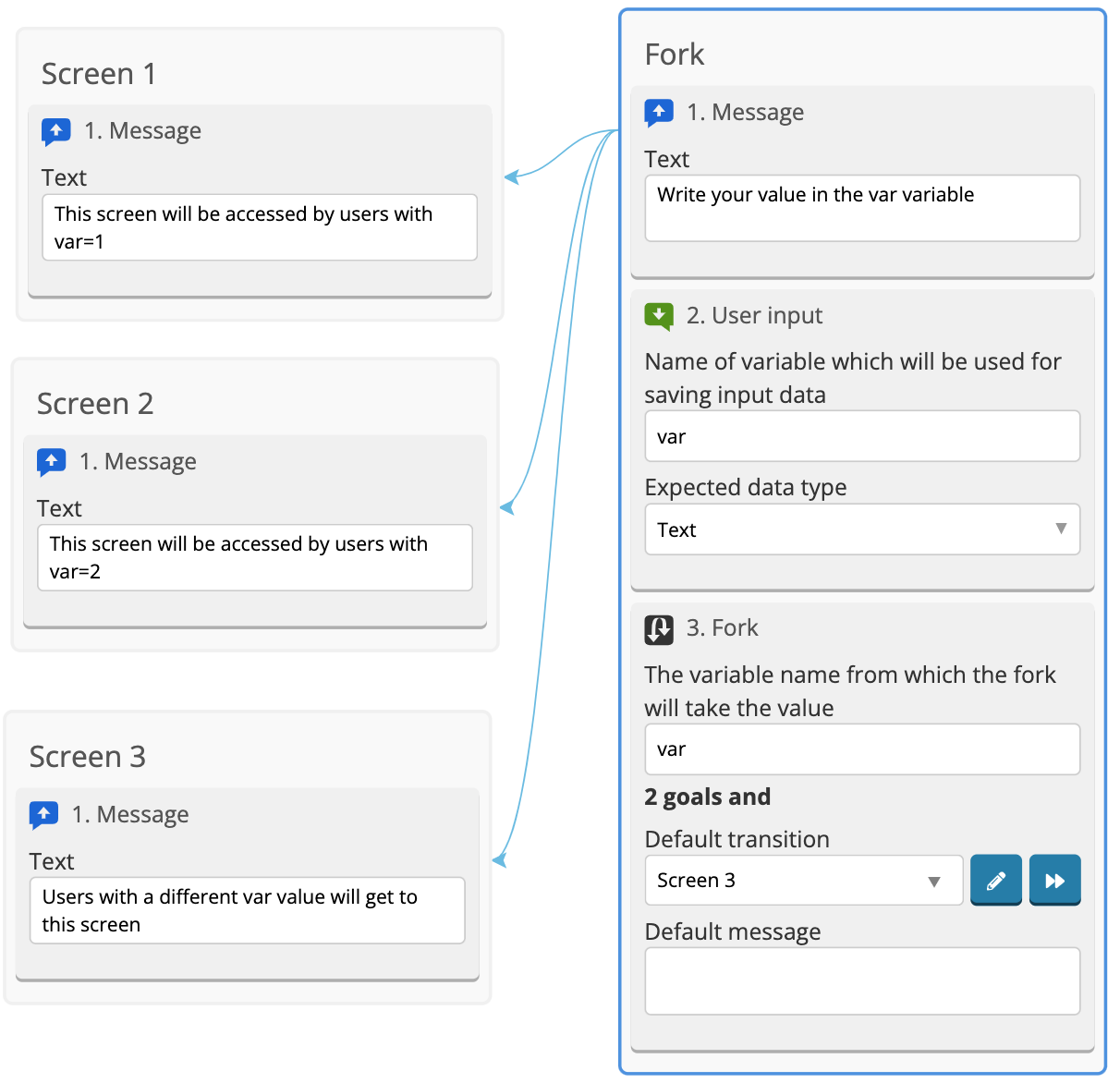 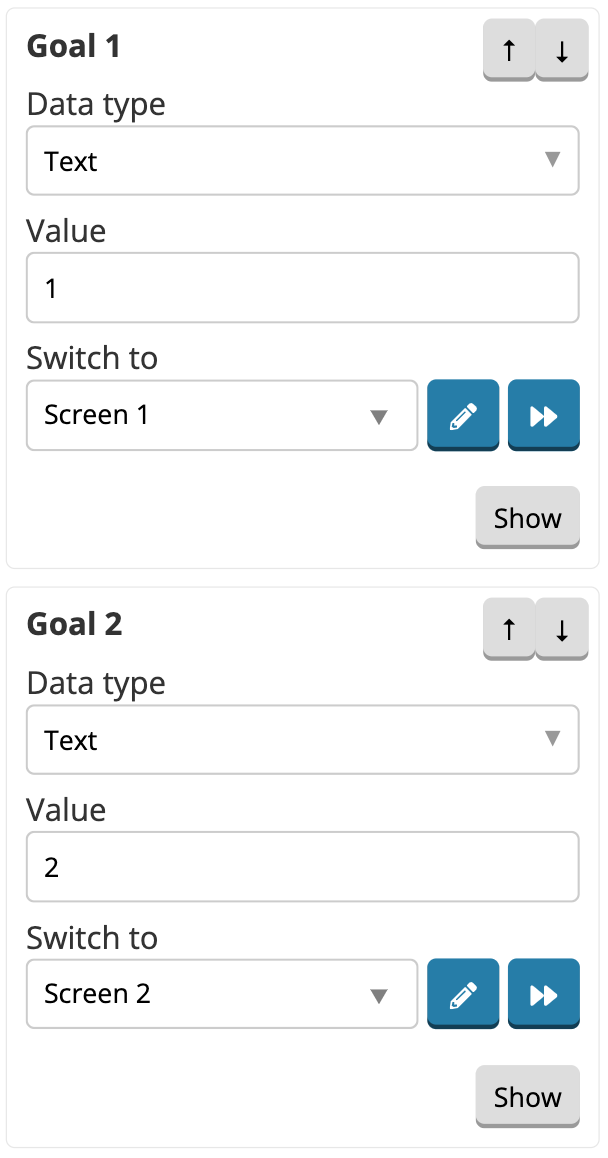 Important! If the user does not have a verifiable variable, then he will be stuck in Fork. To avoid this, before Fork, you need to set the Assign a variable component and write the value {{var}} to the var variable.

Files from users (images, documents, etc.) recorded with Fork, fall into the variables of a specific user (User states section), are stored for 7 days, then disappear beyond recovery. If you need access to the files received in the bot for a period of more than 7 days, then all files must be saved on your device.

Using a Fork, you can write a variable before transferring to another screen.

To write the name of the button or the text from the user to a variable, it is enough to specify the Variable name. Everything what the user sent will be written in it, if the condition of this goal matches. 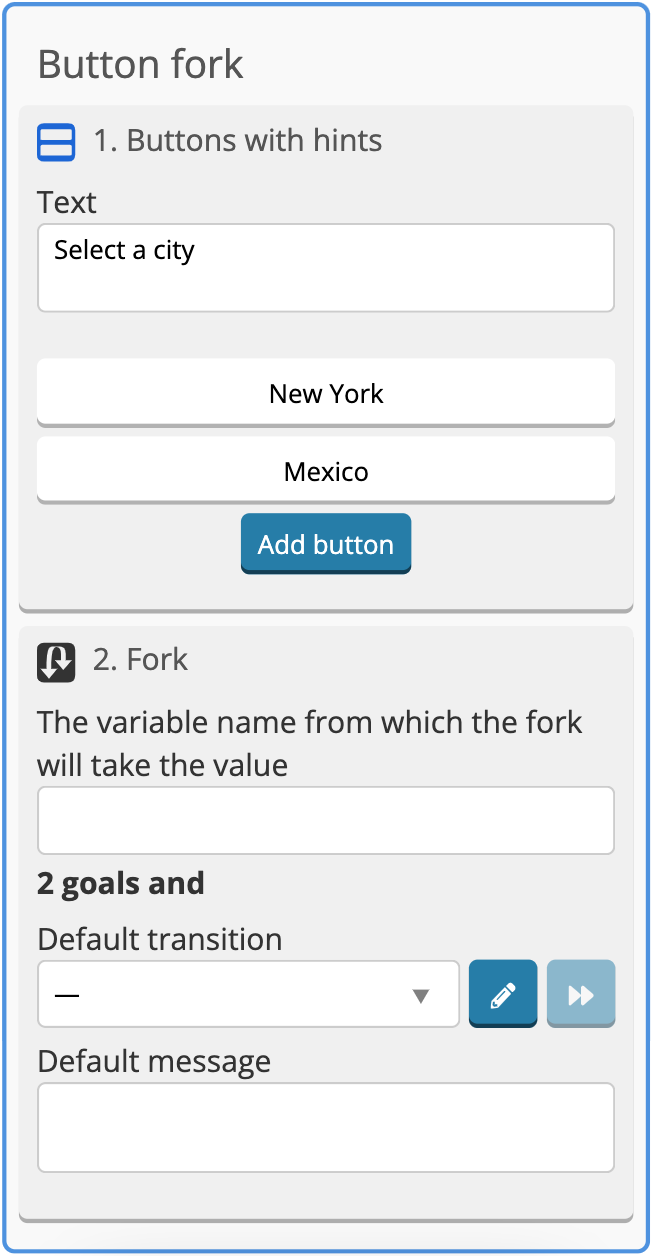 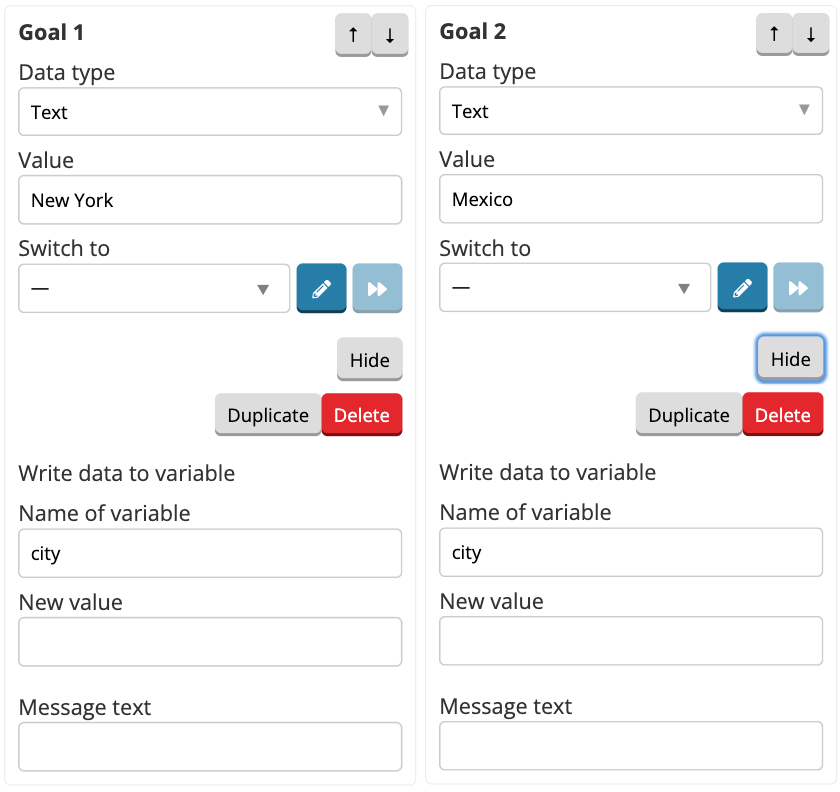 The selected button was recorded in variables.

To write the variable value that will differ from the value that the user input should match, you need to enter the value in New Value field. 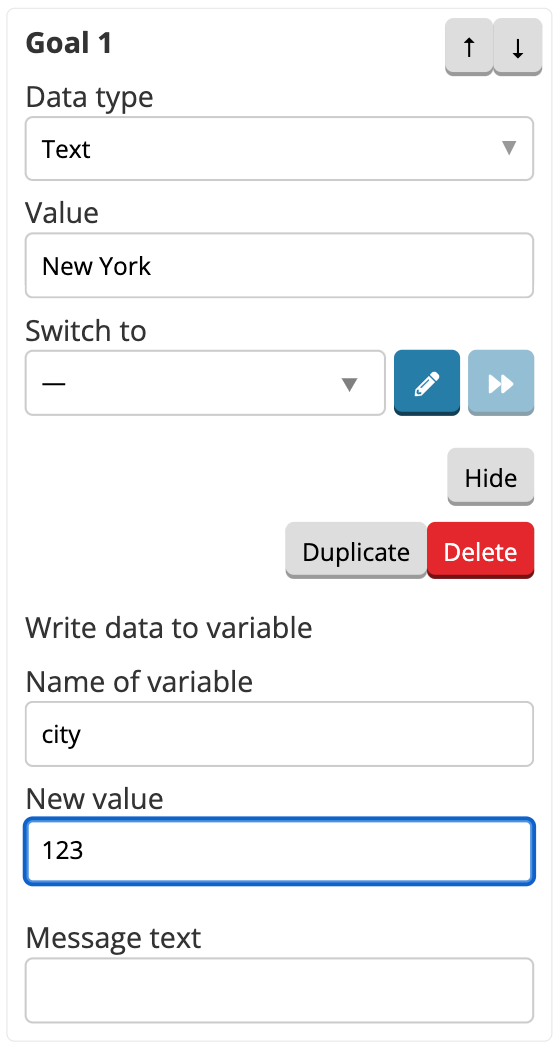 Now the variable has the value set in the Fork settings.

How to accept a file or image from a user

Any file or image can be accepted by selecting File in the data type and setting the variable name in the Fork Target settings. Expand button opens all the Goal settings.

The file will get into the user variable in the form of a link, which you will need to copy, paste into the browser line and press Enter. After that, the file download will begin.

The file will also get into a Dialogue with this user in the form of an active link. If you click on this link, the download of the file will begin. 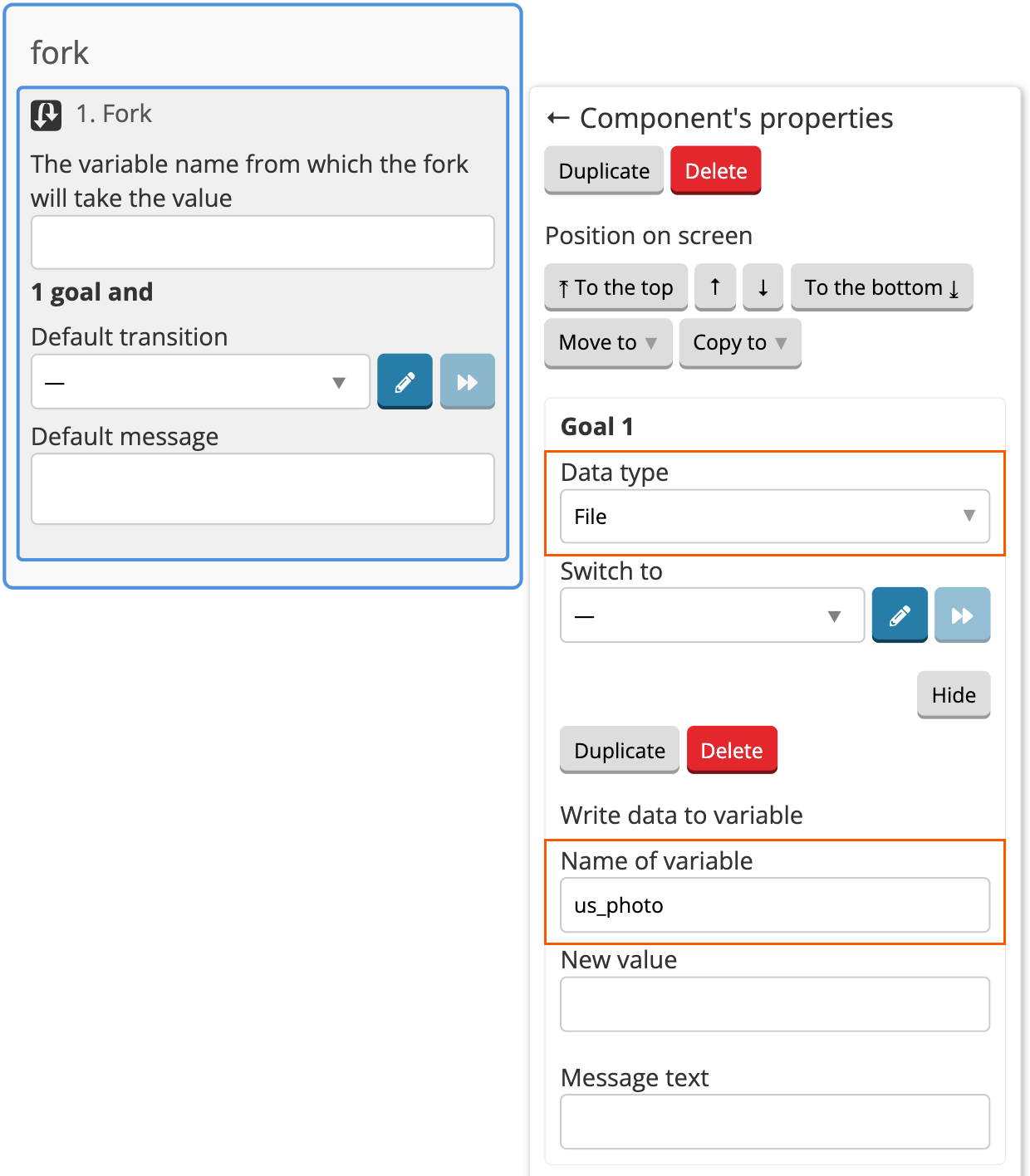 1. Add Buttons with hints to the screen, activate the Don't hide buttons in the Telegram checkbox. 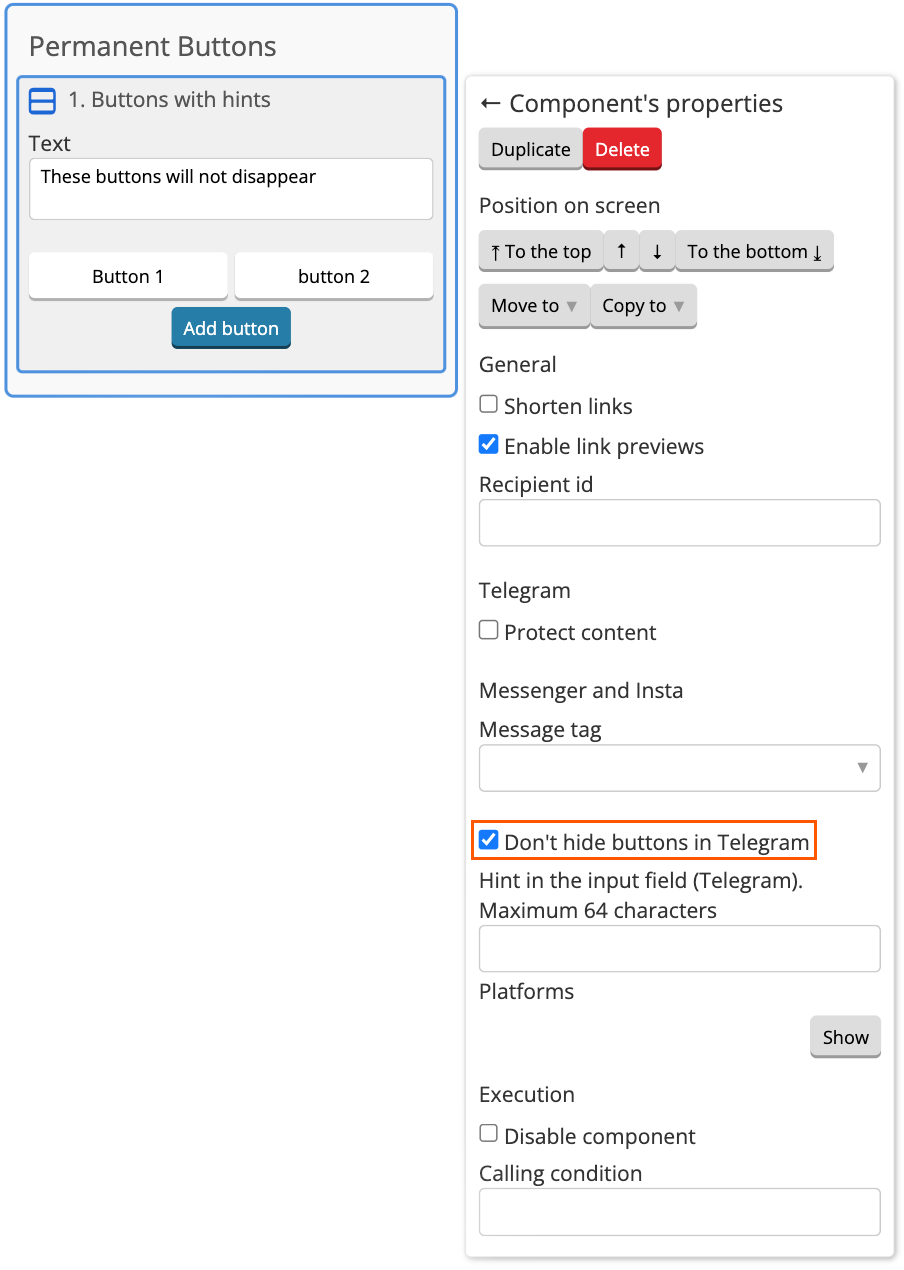 2. Create Fork for Buttons with hints, fill in all the necessary settings. 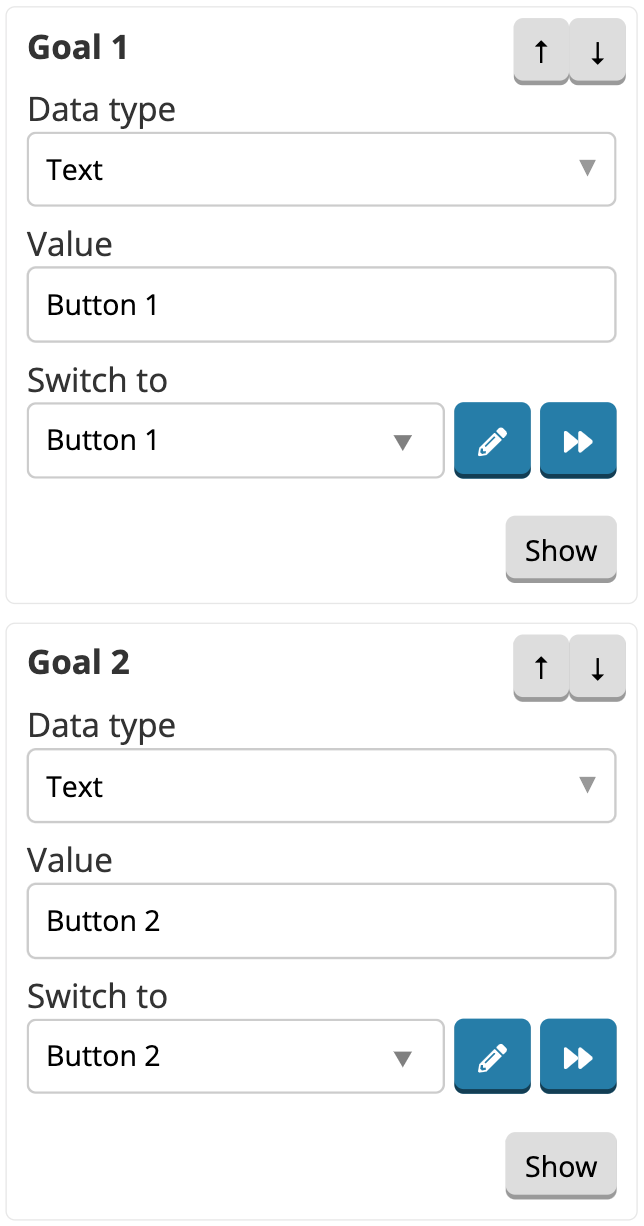 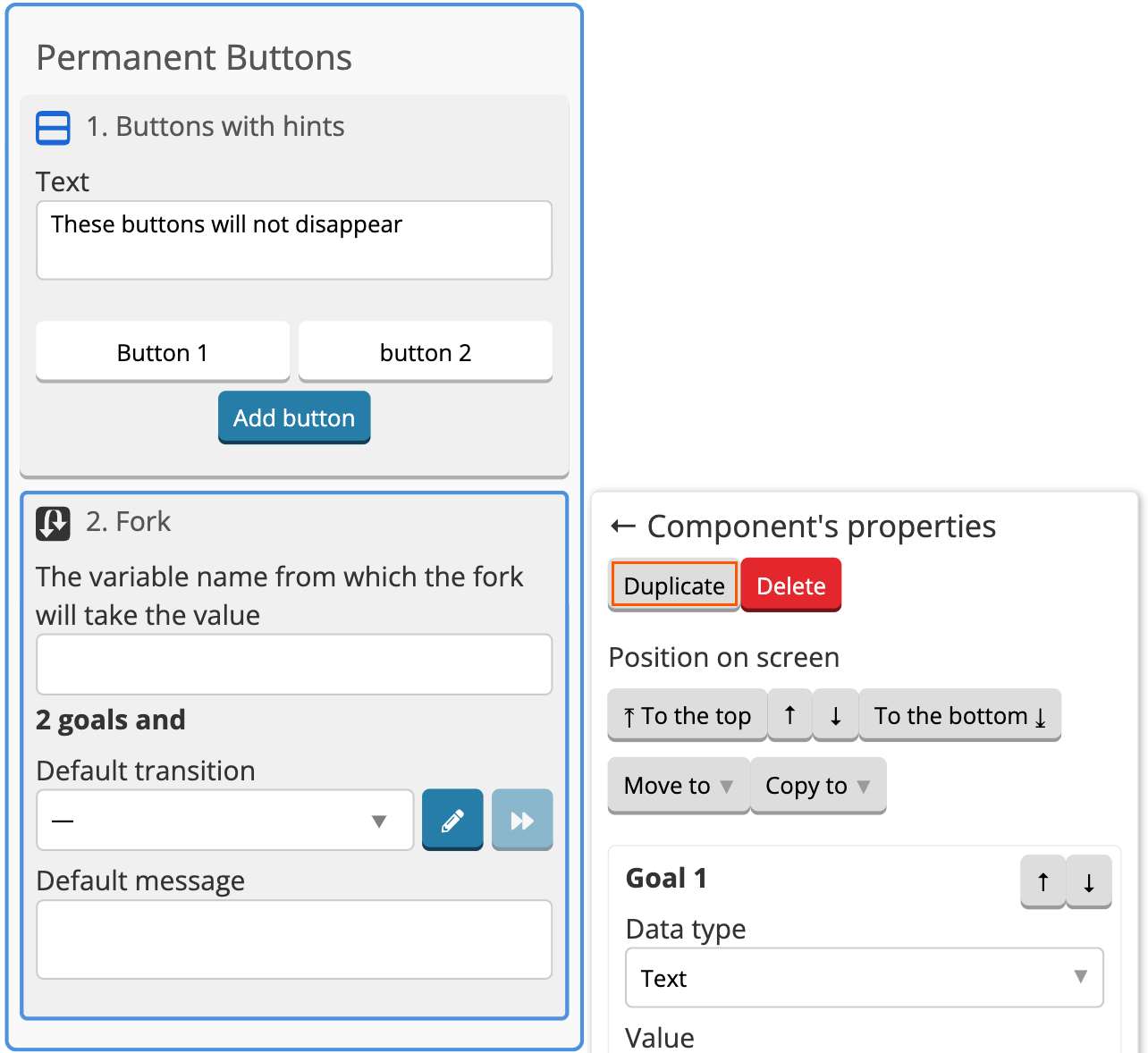 4. Place copies of Fork at the end of all screens where the buttons lead. 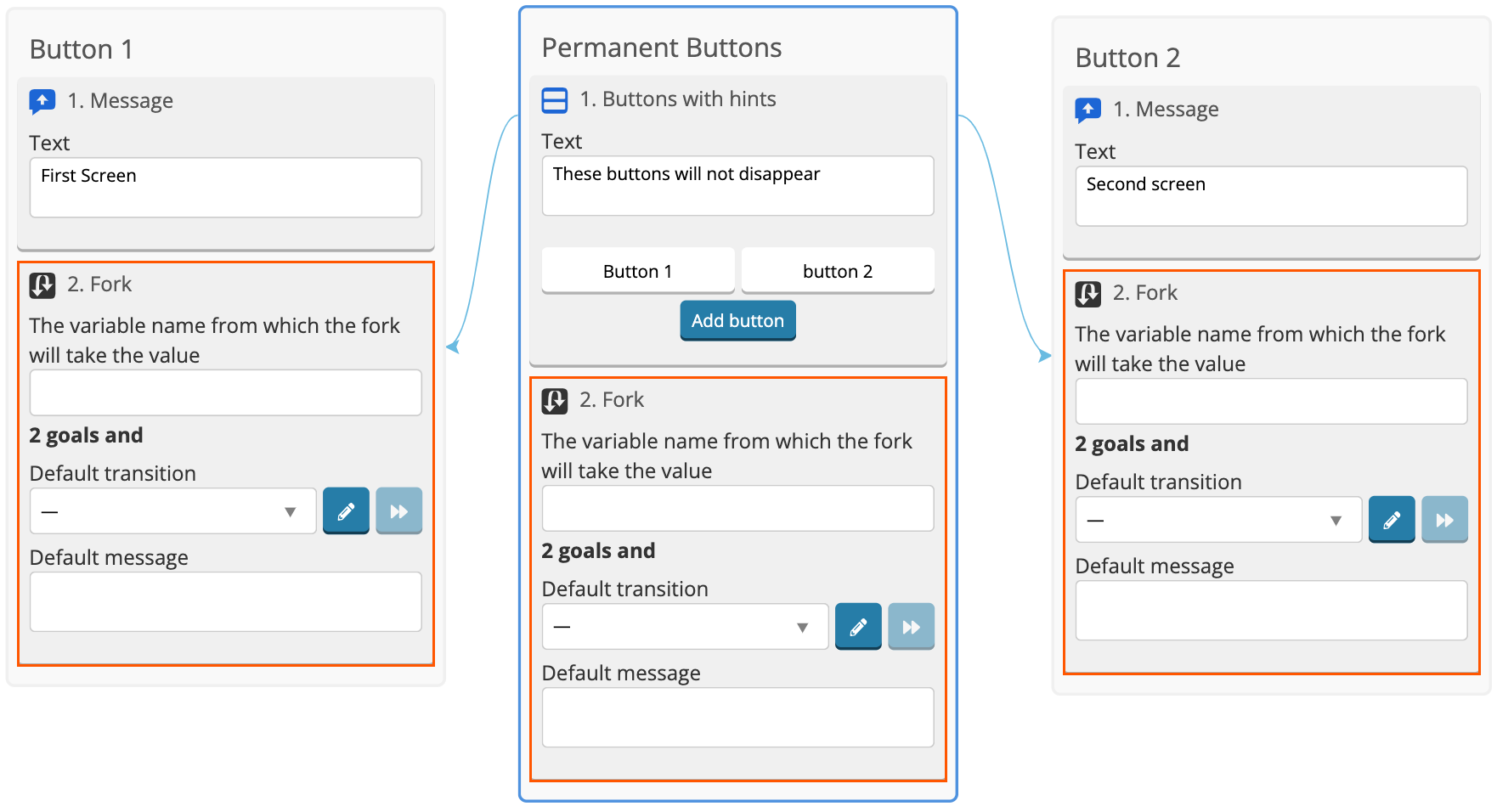 Now the buttons will not disappear and will always be active when pressed. 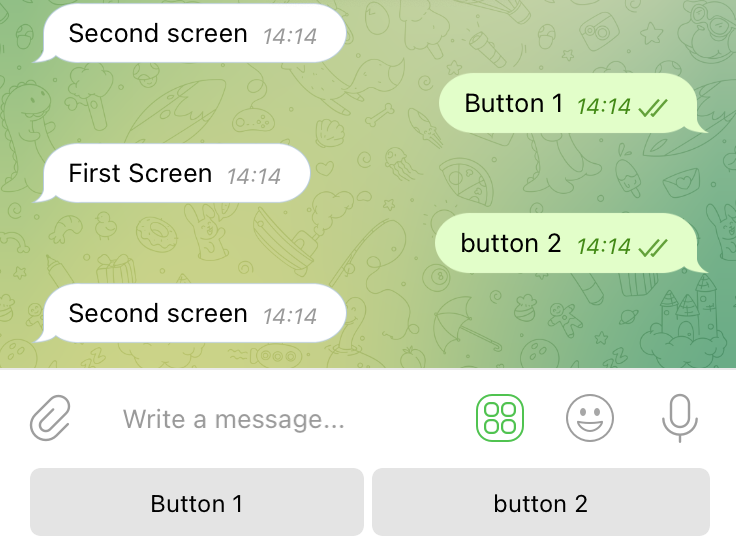 The text in front of the buttons will not be sent again. If you need the text to come, you need to add copies of the Buttons with hints before the copies of Forks.

It is also possible to provide unexpected input from the user, i.e. if he writes a message instead of clicking on the button.

To do this, you need to add a default transition screen to all Forks, on which there will be another copy of the Fork. 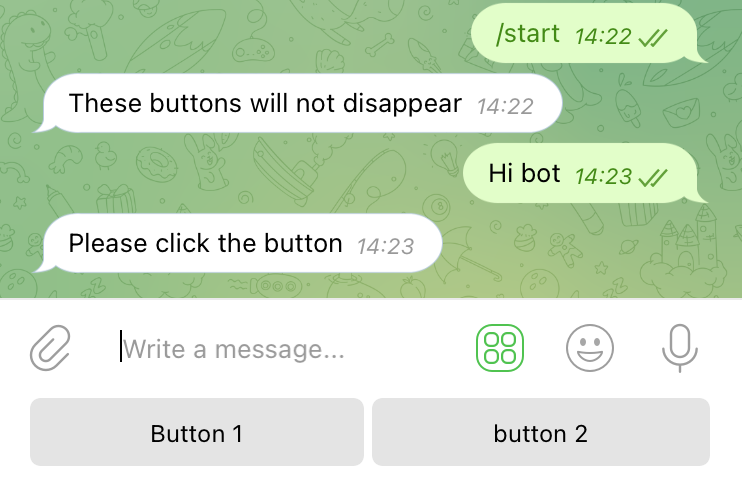 How to extract an email from a user message

From the message "Hello, contact me at mail@mail.com" you can extract an email address that is not recorded in a separate variable using Fork.

To do this, add Fork Goal and fill in its settings:

3. If the script requires, select the screen for the user to forward to.

5. Specify an arbitrary variable name. In our case, the variable is called res. 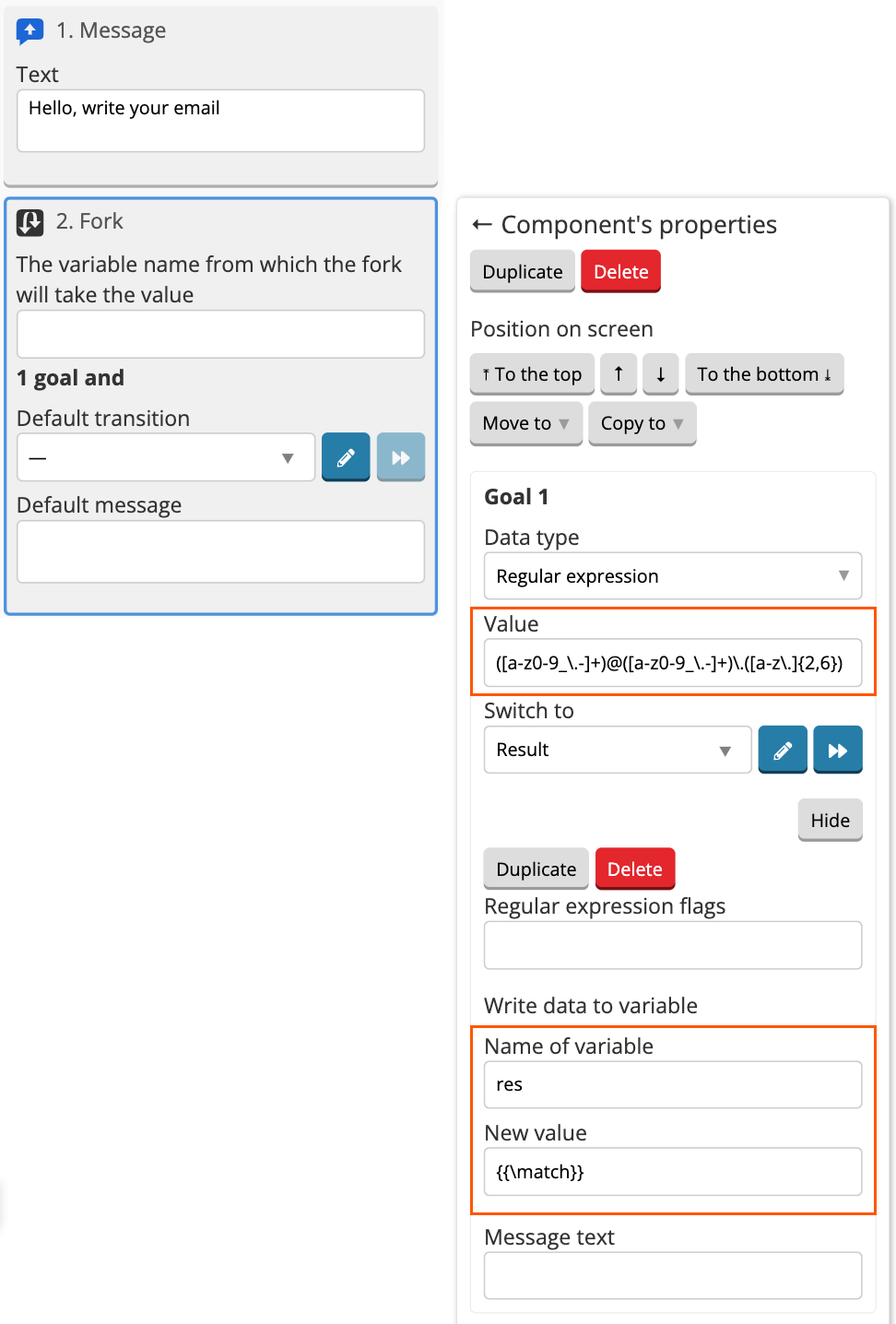 As a result, the email will be located in {{res.[0]}}, where res is the name of your variable.

If necessary, it can be output to the bot, for example, via Message: 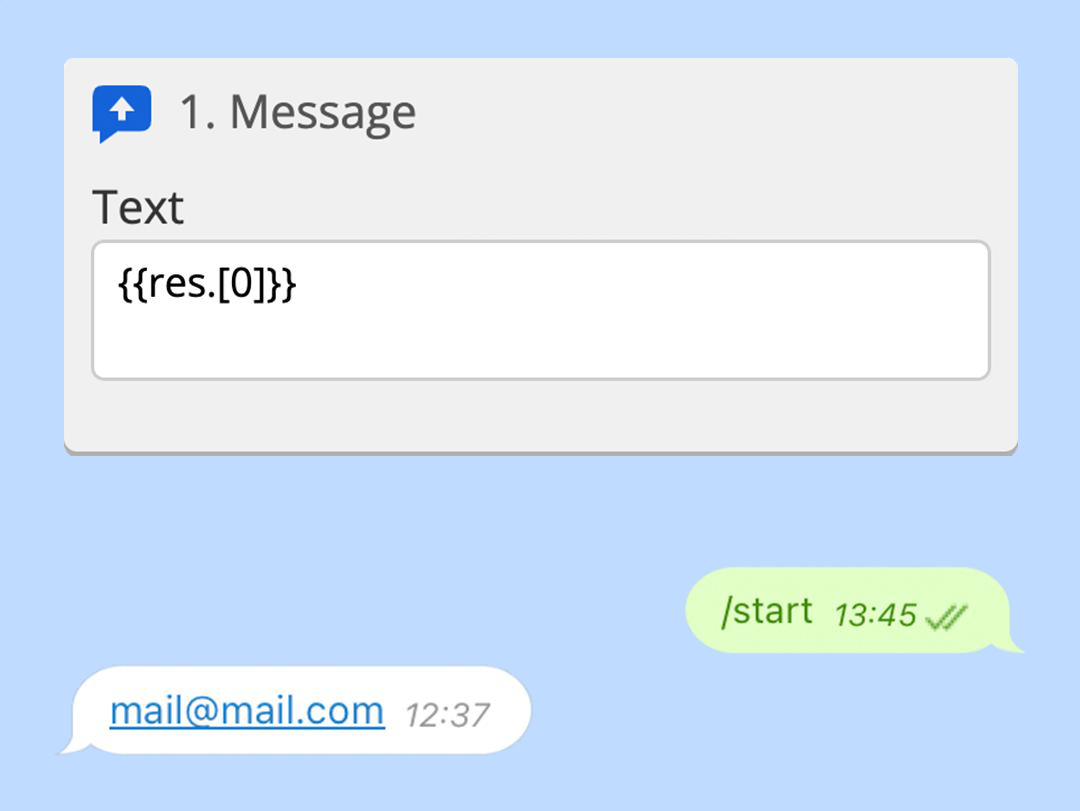 You can see how to configure the interaction Buttons with hints and Fork in the video tutorial: